Ever wonder why some people require thrills and action in order to get engaged in life while others are content reading a book, listening to music or staring at artwork?

There is more to the introvert/extrovert comparison than how each one socializes.

It’s in your genes

According to Dr. Marti Olsen Laney in The Introvert Advantage, there has been sufficient research done on the ‘novelty seeking’ gene, D4DR. Although no one gene determines temperament, D4DR is found on the 11th chromosome which has been deemed the personality chromosome by British journalist and member of the House of Lords, Matt Ridley, because of its influence on behavior, particularly exhilaration and excitement. Thrill seekers (extreme extroverts according to Dr. Marti Olsen Laney of The Introvert Advantage) examined in geneticist Dr. Dean Hamer’s study were shown to have a long D4DR gene and were less sensitive to the neurotransmitter dopamine. Those participants with more reflective and slower paced natures had shorter D4DR genes and a higher sensitivity to dopamine.

Dopamine: The want, desire, seek out and search neurotransmitter

According to the 2012 Psychology Today article titled, Why We’re All Addicted to Texts, Twitter and Google, the neurotransmitter, dopamine, was discovered in Sweden in 1958. It is created in various parts of the brain and is involved in such brain functions as thinking, moving, sleeping, mood, attention, motivation, seeking and reward.

Most people think of dopamine as the pleasure or reward brain chemical but recent research states that those attributes are more strongly correlated with the opioid system in the body. Dopamine is the neurotransmitter that makes us want, desire, seek out and search. It increases our level of arousal and goal-directed behavior. It motivates us to move, learn and survive. Not only does dopamine move us regarding physical needs such as food and sex but it also makes us curious about abstract concepts such as ideas and information.

Advances in brain technology such as PET scans and MRIs have given us a peek inside the brains of extroverted and introverted individuals (determined by questionnaires filled out prior to participation in the scans). Such scans note where blood flows in the brain.

During a study conducted by Dr. Debra Johnson and reported in The American Journal of Psychiatry, it was discovered that extroverts’ blood flowed in shorter (why they can process faster and speak off the cuff) pathways toward parts of the brain where visual, auditory, touch and taste are processed, in other words, where external stimulation (other than smell) is processed.

Another point uncovered during brain imaging studies was that the neuro-pathways most used by extroverts are activated by dopamine. Those participants with an ability to process a higher amount of external stimuli and a novelty seeking personality (extreme extroverts) were less sensitive to dopamine. 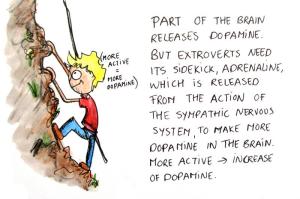 So how do they get the dopamine their neuro-pathways need? They enlist the help of adrenaline, which is released in the sympathetic nervous system, to make more dopamine. The more active the extrovert is the more adrenaline is produced and dopamine increases.

Extroverts feel good when they have places to go and people to see. — Dr. Marti Olsen Laney, The Introvert Advantage

Introverts’ brains work differently than extroverts’. For one thing, introverts have more blood flow to their brains than extroverts. According to Marti Olsen Laney, that indicates more internal 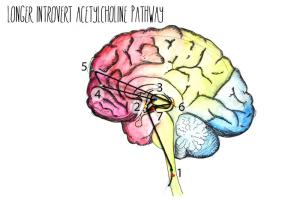 stimulation and sensitivity. The blood in an introvert’s brain travels longer, more complicated pathways and focuses on parts of the brain involved with internal experiences like remembering, solving problems and planning.

Introverts’ brains still use dopamine but are more sensitive to it and too much of it will cause over-stimulation. The more dominant neurotransmitter found in the introvert’s neuro-pathways is acetylcholine. Acetylcholine affects attention and learning, influences the ability to stay calm and alert, utilizes long-term memory and activates voluntary movement. Not surprisingly, acetylcholine stimulates a good feeling when we think and feel.

The science geek in me ponders this…

The recent studies regarding dopamine as a seeking and searching chemical versus a reward chemical makes me wonder about the introvert’s sensitivity to it. The fact that it stimulates curiosity (seeking and searching) about ideas and information (which seems like internal work) makes it seem like the ideal and probable chemical behind our love of internet surfing and research. Could this be an introvert’s way of mitigating and applying dopamine (being active?) without over-stimulating ourselves? Could our brain chemistry/physiology be changing because of the internet? Just a couple of questions that came up as I did the research.

Thank you for allowing me to entertain my science mind. I’ve always had a fascination with neuroscience, biology and anatomy.

Have you noticed your penchant as an introvert to ‘throttle down’ more than ‘rev up the engine’? Do you prefer more active tasks or more reflective? What did you learn from this post?

If you enjoyed this more scientific post, you may also enjoy:

How To Be Lively, Energetic and Vibrant When Your True Nature Is Thoughtful, Introverted and Reticent

How to Protect and Liberate Your Energy:A Guide for Introverts and Anyone Who Feels Drained

There’s Nothing Wrong with You. You’re an Introvert.

About the Author: Brenda Knowles

Because of your blog, I know that it is possible for me to have the love that I want one day and that I don’t have to be alone.  — Indepthwoman  on space2live

I met Brenda and took the MBTI… I had a fairly good understanding of these types before the meeting but was impressed by the depth of knowledge that Brenda shared with me. She clearly has a passion for this work and a gift in imparting the information. There have been doors opened for me because of our talks… — Alan Hintermeister

Your site has saved my sanity and my life. Maybe even my marriage. I work part time and have two young boys at home, my husband is supportive of me but until recently I thought I was going crazy. … Reading your writing not only inspires me to pick up the pen again, but gives me nourishment in the deepest places. I will fight for balance. Everything you write is spot on… And wellness is so incredibly multifaceted.  I was ready to give up hope, but understanding myself through your words is bring…

Brenda has truly opened up a space for introverted types on the ‘net, and her self-revelations are always inspiring. Her voice is one I always look forward to. She is one of the writers that actually played a part in my return to writing.  — S.E. of Sunflower Solace Farms

THANK YOU….. you just summed up my swirling thoughts into something i can read with out everything else in my head meshing with it. I finally feel like i can explain what happens within without getting distracted. I’m an Introvert with ADD and it makes it so hard to explain quite what im feeling sometimes. — M.G. on space2live

I have been dating an introverted man who I am very in love with for almost 2 years.  Reading your posts have helped me to be more supportive and understanding to him especially during the times when he needs space.  I just wanted to thank you for your weekly posts and let you know how helpful they are for someone who is in a relationship with an introvert. C.M. on space2live

Thank you for all the words. You’ve created the magic drug I’ve been looking for all my life. Your blog has transformed my life, and I feel like I am on the brink of a most satisfying fulfilling journey…You’ve made me see everything in a new light. I now feel calmer, able to care better for my toddler, less hateful of people around, and hopeful for my future. I am not so afraid for our marriage anymore. — Shilpa CB

You’re so honest in your writing. It’s bold. It’s frank. It’s wonderful. I could definitely see the work you are doing here as a useful book. It could save/make a lot of relationships! — Jimmi Langemo

That courage and dedication you so generously share with the world, has inspired me to push myself a little harder, persevere at each task a little longer, dig a little bit deeper to where the answers just “feel” right to both my humanity AND my spirit. Your insights have reinforced my direction and given me additional tools that help me clear my path. I’m wired into my creativity as never before and the new music is pouring out of me faster than I can record and produce it; this is the Un…

your depth of understanding, and talent at sharing it amaze me. Speechless… and for your sharing of it.. Thank you… deeply. *sigh, its like coming back into my body through acceptance….. Sherrie on space2live

What BrendaKnowles.com is all about: